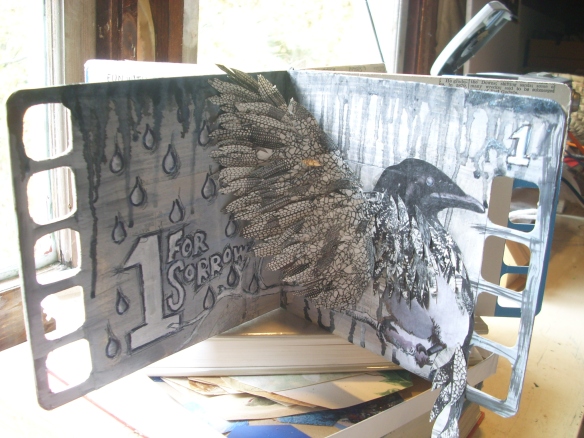 I have to admit to being at a bit of a loose end. Having reached Utopia I was feeling like I had reached a dead end. All summer I have been casting paper and dreaming of all the other projects I was dying to start, but when I finally had time I felt out of sorts and uninspired and a bit afraid of going up the stairs to the studio to start anything new!

I finally talked myself into it by cleaning up and agreeing to just play for a while and not start any serious work.  So I have been rearranging the furniture (I got some new tables and haven’t quite figured out how they will work in my space yet) and putting away stuff and playing around. I collected a bunch of paper I thought “went together” and altered some of those card catalog cards. The end result looked just like something I would do so I decided to have a Jackson Pollock moment and drip enamel paint all over them. Here’s how they look so far, not really very “out there” so I plan to add more layers, its only paper after all. The plus is I also dripped on a bunch of paper too, so I have that to mess around with next!! 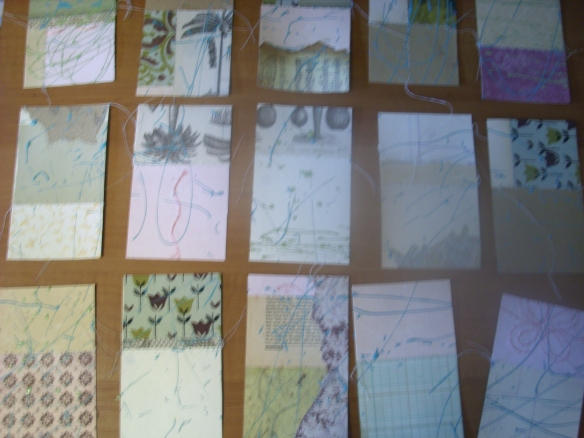 Feeling braver I pulled out a bunch of half started things to see if there was anything there with any life in it. I found a child’s board book that I had started to alter. I had been waiting for an idea to strike. I am always a bit amazed by how ideas arrive.

Let me explain – Saturday I was teaching a workshop on how to make really cheap but fabulous Halloween costumes (all those years of theatrical costume making occasionally pay off!) and I was showing the students how I had made angels wings with copy paper and cardboard. The students of course wanted to do something more Goth, so we made a very scruffy Raven’s wing together, using black construction paper. 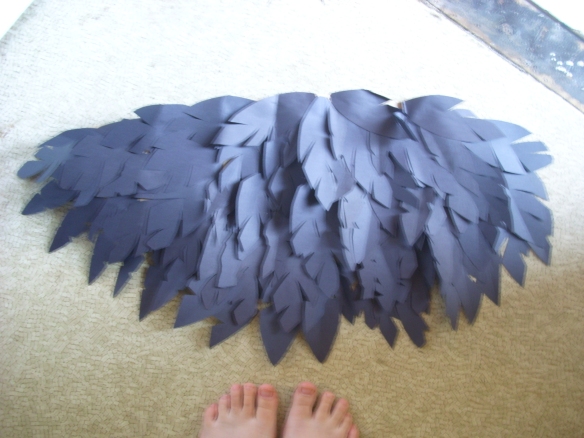 As I was mindlessly helping to cut out all those paper feathers I  started hearing that old rhyme about magpies in my head, and there it was, a finished book, about magpies, just there in my head. Sometimes I’d like to climb in there and see what goes on!! So yesterday I started on page one. I was a bit apprehensive because I had such a clear idea of how the pages should look, sometimes it is hard to get the idea out onto the page the way you imagine it, but everything was just flowing so smoothly and then it was done (well the first page!). Its not great art, but it is fun, and I am having a wonderful time! 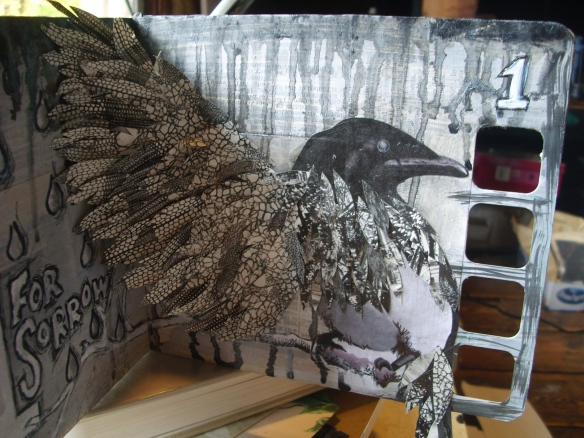