* warning – this post contains a brief reference to women’s genitalia

I have finally excavated the house from under the last month’s chaos, traveling and commissions do throw you out of routine a bit! and I am finally back at work in the studio. Actually this wasn’t my plan – my plan had been to grab a whole bunch of books from the library and have a nice long relaxing break from everything reading on the porch – which was going as planned until I switched from fiction to non-fiction…

I was reading Women’s Work – The First 20,000 Years by Elizabeth Wayland Barber, which was generally filling my head with a lot of inspiration for my upcoming show “tangled” (which will have something to do with weaving and threads of ideas) when I came across this image of a traditional Slavic embroidery design of the Goddess Berehinia who protects women and their fertility.

If you have been following my work in the last few months you can probably guess what happened next – I thought – wow! that looks a lot like those Elizabethan blackwork designs I have been working with, and, well, yes I decided to turn her into a binding!! Here’s the diagram so far without all my notations and squiggles telling me where to go (I want to make it first before I share!). I had to change the pattern on her skirt, as the original won’t work as a binding  – but in keeping with the whole feel of the piece I have added a very traditional lozenge shape, which was traditional in women’s clothing, often they were embroidered with little curly hooks around them – a powerful fertility symbol representing the vulva. It occurs to me that she will have to have some sort of background design, which I think I will make another colour,  so the binding will be structurally sound – but I am ready to begin! I think she will be red not black as that would be the traditional colour – red invoking blood and life and with it protection from demons. 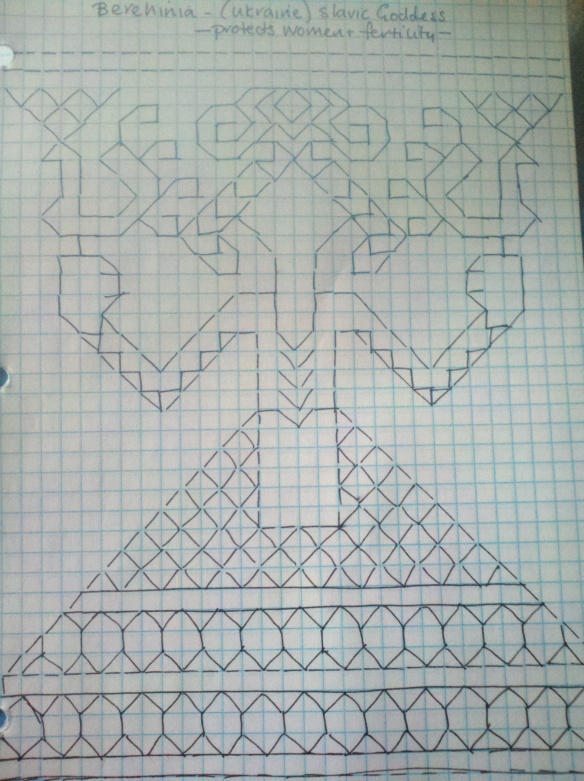 Suddenly all is right with the world – here is my work. I don’t know if it has any value to anyone but me, but I am its voice, so here I am about to sew. I have a feeling I am going to zip right through this, so maybe even a picture of her all finished before the weekend is through.

2 thoughts on “Back in the saddle”